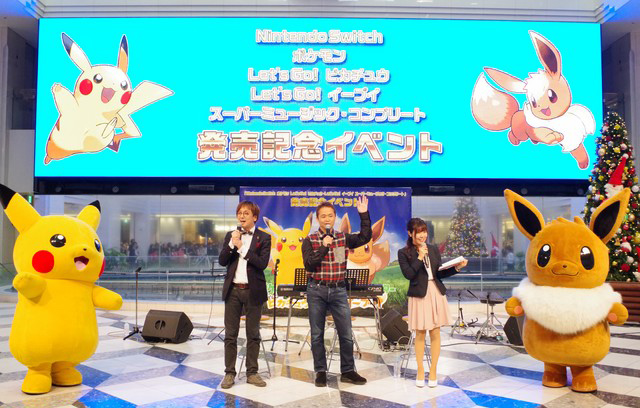 The event's MC was Emiri Suzuki (鈴木笑里) and she was quickly joined on stage by Pikachu and Eievui. They were then joined by Junichi Masuda and Shota Kageyama who both hugged Pikachu and then sat down. They then began talking about the music for the new games which were based of the GameBoy game "Pocket Monsters Pikachu" that was released about 20 years ago. This is the first time that the main Pocket Monsters series title can be directly connected to a TV, so the music had to be adjusted so that the sound could be heard from the TV speakers comfortably. The songs recorded on the soundtrack CD have also been adjusted differently from the game so they can be listened to comfortably while being played on dedicated audio playback equipment. They suggested listening to them both and comparing the two. Shota Kageyama, Hiroaki Tsutsumi (堤博明) on Guitar and Kon Shirasu (白須今) on Violin then performed a few tracks from the game live for the audience.